Source from Phuket Wan, 11 April 2008
ALMOST as many illegal Burmese have been arrested on Phuket and trucked back to the border so far this year as in the whole of last year. 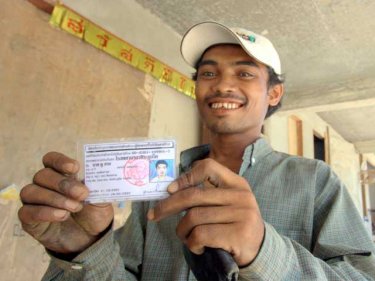 Construction worker Too Nu on Phuket with his worker ID
Photo by Big Island Media
Figures from Phuket Immigration list 2923 arrested Burmese so far this year, including 107 who were trucked off the island on April 9. The breakdown is January 798, February 1093, March 824 and 208 so far in April.
The total compares with 3622 for the whole of 2007, when the highest individual month was March with 560 arrests.

The Superintendent of Phuket Immigration, Police Colonel Chanatpol Yongbunjerd, told Phuketwan that the illegal problem had become greater this year.

''I am asking police in Patong, Chalong and Phuket City for help,'' he said. A comprehensive crackdown on illegal Burmese is planned after Songkran, from April 21 to 25.

The number of Burmese being arrested this year is placing pressure on the Immigration jail facilities, which are not built to hold large numbers of people for more than a few hours.

The deaths of more than 50 Burmese in a container on the back of a truck near Ranong on April 9 indicate more people may try to come by land rather than risk travelling by boat in monsoon weather.

It's a simple ID card, about the same size and shape as most driving licences. A permit to work in Thailand.

Hardly worth your life.

Yet increasing numbers of Burmese seem prepared to risk death to cross the border, where they can expect to find work doing menial labor.

Construction sites, fishing trawlers, plantations, home-help: the Burmese do all the lowly-paid jobs that Thais are sometimes reluctant to do, at least in sufficient numbers.

It's said the resorts along the Andaman Sea that were flattened by the 2004 tsunami have mostly been rebuilt on the backs of Burmese.

Burmese are now coming in such numbers that cross-border migration has become an issue of national security, with the Thai Navy exploring a top-level suggestion that an island detention centre would become a suitable deterrent.

The wealthy tourists who flock to Phuket in growing numbers drive past shanty towns composed of corrugated iron shacks where Burmese laborers live in primitive conditions under an 8pm curfew.

They are forbidden to own mobile telephones or motorcycles, blamed for almost every crime on the island, and suspected of spreading tuberculosis and HIV.

Phuket's foremost heroines, immortalised in one large statue on the main road from the airport, are a pair of sisters who helped to beat off a Burmese invasion of the island in 1785.

Ever since, it seems, the Burmese have been trying to creep back.

The Chief of Phuket's Employment Office, Nataya Anudit, told Phuketwan that 35,116 Burmese have the precious ID cards and at least 20,000 more work illegally on the island.

''Construction companies are always looking for more workers,'' she said. ''If they cannot get them legally, they usually find them illegally.''

The problem is mirrored in other provinces along the coast but Phuket, with its heady mix of wealthy tourists and a booming economy, is where the Burmese want to be most.

More are dying for the opportunity. It is the sudden increase in the arrivals of the Rohingya, a Burmese minority Muslim group, that has now caused a headache for the Thai military.

A boatload of about 80 recently arrived on Koh Kor Kao, an island not far north of Phuket.

They were reported to local authorities by anxious villagers, and told immigration officials that there had been deaths onboard on their 11-day voyage south.

Like all Burmese caught illegally along the Andaman coast, the Rohingya were trucked straight back to the border, where they will be refused entry because Burma does not usually allow illegals to return.

There are fears that unless an example is made, Burmese Muslims could link up with the southern Muslims who are being blamed for the deadly separatist unrest in Thailand's deep south provinces.

Those Burmese who do find legal jobs, like Too Nu, who works on a site in Phuket City, benefit from the minimum wage of 193 baht, which is about four times what laborers are paid in Burma, if they can find work.

Another Burmese, a woman who came to Phuket illegally, told of having to pay police bribes to get into the country.

She now has a legal job as a housemaid, assisted in making her position legal by a helpful employer. Burmese who do win the right to work often prosper on Phuket.

But many others are arrested and trucked back to the border.

Laurence Gray, regional advocacy director, World Vision Asia Pacific, confirms that extortion is likely among vulnerable groups such as the Burmese in Thailand.

''Illegal migrants will often be made to work long hours or not paid wages at all,'' he said.

A World Vision survey of almost 1200 Burmese involved in so-called ''blind migration,'' the phrase for when people crossed a border without a job to go to, indicated about one in 10 were led into prostitution.
Posted by Unknown at 00:53 No comments: Links to this post

Source from Phuket Wan, 10 April 2008
The container was found open on the parked truck on the main road leading to Phuket, where the dead and 67 others who survived the ordeal hoped to start a new life.
The death toll includes 37 women and 17 men.

Nine of the survivors are being treated in the local Suksomlan Hospital. Another has been taken to Ranong Hospital.

Head of Suksomlan police station in Ranong, Phuwanai Wattasamai, told Phuketwan that the people in the container were being smuggled to the holiday island by road.

When the grisly cargo was discovered on Wednesday evening, police called a doctor who helped some suffering survivors and diagnosed that the dead victims had suffocated in the container.

Survivors were rounded up and most are now being held in cells in Ranong. The container was usually used for refrigerating fish.

The incident highlights the role of ''snakeheads,'' people traffickers currently said to be cashing in on the large number of Burmese seeking to leave the country.

Witnai Jurai, a police officer based in Ranong, told Phuketwan that the container filled with people had been carried to Ranong, on the Thai side of the border, by ferry from Victoria Point, the Burmese town across the mouth of the river.

''The driver of the truck picked the container up on the Ranong side. Soon after, he stopped the truck and opened the back to check on his cargo.

''When he saw what had happened inside, he ran away. Local people called the police.''

The driver, a Thai, has yet to be found.

One group of Burmese, the Rohingya, who are Muslims, have been fleeing south to Ranong, Phang Nga and Phuket in such large numbers that the Prime Minister recently supported a plan to create an island detention centre in the Andaman Sea as a deterrent to others.

The Third Navy, based on Phuket and Phang Nga, has identified several islands that would be suitable for such a centre.

The deaths in the containers are likely to throw the international media spotlight onto the issue of Burmese refugees seeking a better life in Thailand, especially in the Phuket and Phang Nga construction industries.

Some Burmese have legal status but the numbers are never sufficient for the large amount of new building, especially of tourist resorts as the region fully recovers from the 2004 tsunami.

The dead victims from the container were taken to a charity foundation. They will probably have paupers' burials, the fate of Buddhists who cannot afford cremation at a temple.

The newsagency AFP reports that the migrants were supposed to pay a Thai smuggling ring 6000 baht ($US200) each to transport them from the border to Phuket, about four-hours' drive south.

Once there, they hoped to find work as day labourers.
Posted by Unknown at 00:50 No comments: Links to this post

The Rohingya are a Muslim ethnic minority indigenous to northern Arakan State in western Burma. Descended from 7th century Arab traders, the estimated 3 million Rohingya have suffered a history of persecution in Burma and many have fled to Bangladesh as refugees due to land confiscation and to escape human rights abuses such as murder, rape, army brutality and forced labor. Many are now seeking new lives in Thailand.

A group of Rohingya, who had starved or dehydrated to death after their wooden trawler stalled at sea, was found by Sri Lankan navy on early March. (Photo: Reuters)


''To stop the influx, we have to keep them in a tough place,” Samak was quoted as saying by the English-language Thai daily newspaper on Saturday. “Those who are about to follow will have to know life here will be difficult [so] they won't sneak in.”

The Thai premier made the statement after emerging from a two-hour meeting of the National Security Council last week, saying that the navy is exploring a deserted island to place the Rohingya refugees living in Thailand.

Samak also suggested that the Office of the UN High Commissioner for Refugees (UNHCR) should step in and provide financial support to the Thai government which had shouldered the Rohingya burden for quite some time.

The plight of Burma’s Rohingya has long been one of the worst stains on Burma’s deplorable human rights record.

Since early 1990s, the Rohingya have traveled by land and sea into Malaysia and southern Thailand where they hope to find understanding from people of the same faith—Sunni Muslim.
Last week the Thai army's Supreme Commander Gen Boonsrang Niampradit told reporters after a meeting with governors of 31 border provinces that an alarming rate of Rohingya have been sneaking into Thailand. He did not give the exact number of Rohingya in Thailand.

The influx of Rohingya has brought unwelcome attention from Thai authorities, nervous of any incidents at a time of heightened fears of terrorist activity in southern Thailand.

However, there is no evidence that any Rohingya have been linked with the unrest in southern Thailand.
Posted by Unknown at 00:31 No comments: Links to this post

Video of Crisis in Arakan

Pl visit our video site to find out the crisis in Arakan-
http://www.simplesite.com/Rohingyavideo/105024805

The ongoing crisis in Arakan could not be stopped until the government reinstalled Law and Order on Rakhine people who are continued to attack defenseless confined Rohingya people.

Our greatest concern over the ongoing grave situation in Arakan State of Burma that causing death to thousands of Rohingya people.

We are sending our most urgent request to you to immediately intervene and protect millions of Rohingya people of Arakan from controlled genocide.

“Rohingya refugees need the same protection, assistance, education and a safe environment like others”

"Everyone has the right to seek and enjoy in other countries asylum from persecution,"UDHR Article 14(1).