BANGKOK: -- Thai government is not happy with US actress Angelina Jolie and the United Nations High Commission for Refugees for criticising that Thai government did not respect Rohingya boat people's human rights

Thai Foreign Ministry's Permanent Secretary Virasakdi Futrakul said the Rohingya's presence in Thailand is a hot issue. ""It was a coincidence that the Rohingya was a hot news issue at the time. We must warn UNHCR that they should not comment on the matter because they have no mandate."

The warning came after UNHCR's goodwill ambassador Jolie who visited Burmese camps along Thai border last week criticised Thai government of ignoring the plight of Rohinyas and suggested that Thai government should take better care of the Burmese ethnics.

Virasakdi told reporters that Angelina was not focused on the Rohingya, but was visiting Burmese refugee camps.

"The UNHCR should not have brought Jolie, its goodwill ambassador, to one of the nine refugee camps stringing the border which are run by Thailand's interior ministry."

"The Thai government will issue a reprimand letter to UNHCR, asking why it allowed Angelina Jolie to visit the refugee camps," Virasakdi told reporters.   -- The Nation 2009-02-11

London, Feb 12 (ANI): American actress Angelina Jolie has earned herself the ire of the Thai government after she commented on the plight of Myanmar migrants.
Jolie and Brad Pitt had visited a refugee camp on the Thai-Myanmar border last week, as part of her role as a goodwill ambassador for the United Nations (U.N.), and the migrants there told her that the Thai military was mistreating them.

Upon hearing their story, Jolie issued an emotive plea to the Thai government urging the authorities to respect the rights of the Rohingya, a Muslim ethnic group from Myanmar.
In her plea the Tomb Raider star asked the Thai government to be “just as generous to the Rohingya refugees who are now arriving on their shores” as they were to the Ban Mai Nai Soi camp’s, 18,000 other refugees from Myanmar.

The Thai army has been accused of detaining and torturing hundreds of Rohingya who, in recent months, fled to Thailand to escape poverty in Myanmar.

But now Jolie has been reprimanded by Thai officials for her comments, and they have stated that the United Nations refugee agency should not have allowed her to visit the centre.
“Angelina was not focused on the Rohingya, but was visiting Myanmar refugee camps,” the Daily Express quoted Virasakdi Futrakul, permanent secretary of the Thai foreign ministry, as saying.

“It was a coincidence that the Rohingya was a hot news issue at the time, therefore we must warn (U.N. refugee agency) UNHCR that they should not comment on this issue because they have no mandate on this issue.
“The Thai government will issue a reprimand letter to UNHCR asking why it allowed Angelina Jolie to visit the refugee camps,” he added.
A representative for UNHCR claims that the Thai Ministry of Interior issued camp passes for both Jolie and Pitt. (ANI)
Posted by Unknown at 07:34 No comments: Links to this post

Less than 100 of them turned up at the Thai Embassy to protest against the alleged abuse of Rohingya boat people seeking refuge in Thailand.

They forwarded a memo to embassy staff in which they "condemned Thailand's atrocious human rights record".

On the alleged mistreatment of the boat people by the Thai military, they called for the issue to be brought before the International Court of Justice.

The group then moved on to the Bangladesh Embassy, where they protested the mistreatment of Rohingya refugees detained in Bangladesh.

Over the years, hundreds of thousands of Rohingyas have fled to neighbouring Bangladesh to escape persecution in Myanmar. But they receive little or no support from the Bangladeshi government. - CNA /ls
..........some photos of one of the protest in relation to boat people added by BRAT.............. 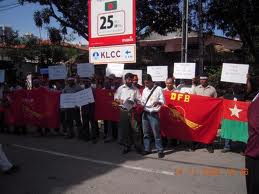 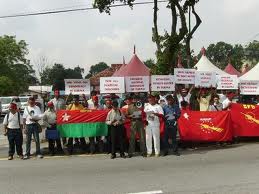 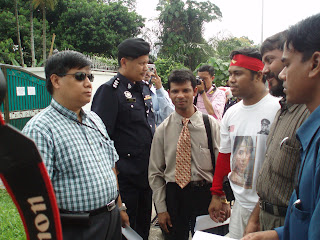 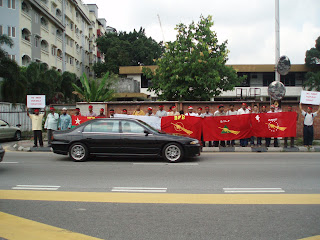 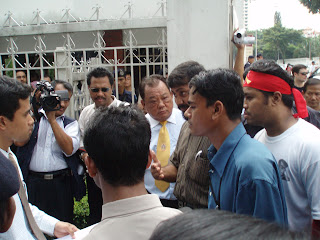 The country's Consul General Ye Myint Aung wrote to heads of foreign missions in Hong Kong and local newspapers insisting the Muslim tribe should not be described as being from Myanmar, the South China Morning Post reported.

"In reality, Rohingya are neither Myanmar people nor Myanmar's ethnic group," he said.

The envoy contrasted the "dark brown" Rohingya complexion with the "fair and soft" skin of people from Myanmar, according to the Post.

"It is quite different from what you have seen and read in the papers.

(They are as ugly as ogres)," Ye Myint Aung was said to have written. It is not immediately clear why the phrase was in brackets in the original letter.

The Rohingya are stateless and face religious and ethnic persecution from Myanmar's military regime, forcing thousands to take to rickety boats each year in a bid to escape poverty and oppression, rights groups say.

But Myanmar's junta denies the existence of the Rohingya as an ethnic group in the mainly Buddhist country and says the migrants are Bangladeshis.

Thailand's military was accused in January of towing hundreds of Rohingya out to sea in poorly equipped boats with scant food and water after they tried to flee Myanmar, a charge Thailand has "categorically denied."

The accusations surfaced after nearly 650 Rohingya were rescued off India and Indonesia, some saying they had been beaten by Thai soldiers.

Hundreds of the boat people are still believed to be missing at sea.

The case has raised the profile of the group's struggle, prompting Ye Myint Aung's letter, the Post said. 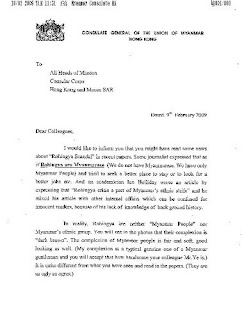 Posted by Unknown at 10:37 No comments: Links to this post

Over 90 organisations worldwide call for Rohingya and Bangladeshi protection

Statement on the treatment of Rohingya and Bangladeshi ‘Boat People’ in Asia - February 6, 2009
Source from asi-pacific-solidarity.net,

We, the undersigned organizations, are extremely concerned about the treatment of over a thousand Rohingyas from Burma and migrants from Bangladesh who have been forcibly expelled and abandoned in international waters by the Thai security forces since December 2008.

Over the past few weeks, several boats have been rescued off the coasts of Indonesia and the Andaman Islands of India. Survivors tell of having been detained in Thailand, beaten, and towed out to sea on boats without engines or sufficient food and water. Several hundred remain missing and are feared dead.We are also concerned about the fate, including possible refoulement, of the Rohingya who remain in detention in Thailand, Indonesia and India. If Rohingyas are returned to Burma they could face widespread human rights violations, including forced labour, forced eviction, land confiscation and severe restrictions on freedom of movement. Refoulement of such individuals is prohibited under customary international law.
Background
Over the past two years, the number of people leaving Bangladesh and Burma by boat for Southeast Asia has grown. They have fled in search of protection, safety and/or work. Most are Rohingyas, a Muslim minority from western Burma.
The Rohingya have been rendered stateless in Burma and have experienced systematic discrimination, exclusion, and human rights violations in Burma for decades, prompting hundreds of thousands to seek refuge in neighbouring countries, most notably Bangladesh, Malaysia and Thailand. Most are without legal status and are vulnerable to arrest, imprisonment, detention and deportation.
Aside from the Rohingya, millions of ethnic minorities and political activists have fled Burma, fearing persecution, violence and human rights abuses.
Specific Concerns
We are concerned by the following reports about the Rohingya:
We recognize that:
Recommendations
Given the gravity of situation, we recommend that:
The Burmese Government:
The Thai Government:
The Indonesian and Indian Governments:
The Bangladeshi Government:
The members of the Association of South East Asian Nations (ASEAN), the Bay of Bengal Multi-Sectoral Initiative for Technical and Economic Cooperation (BIMSTEC) and the South Asian Association for Regional Cooperation (SAARC):
The United Nations and the International Community:
This statement was written by members of the Asia Pacific Refugee Rights Network (APRRN), and has been endorsed by the following organizations and individuals:
Australia

23. The Egyptian Foundation for Refugee Rights

25. Centre for Development and Human Rights

Posted by Unknown at 07:33 No comments: Links to this post

United States has resettled some Rohingya referred by U.N. agency.

By Stephen Kaufman
Staff Writer
Washington — The Obama administration says countries to which Burmese Rohingya migrants have fled should carefully screen them — with the involvement of the U.N. High Commissioner for Refugees (UNHCR) — to determine if they need protection.

The United States considers the Muslim Rohingya people, who live mainly in the Burmese state of Northern Rakhine, to be a religious and ethnic minority that is being persecuted by the country’s military regime.
Burma does not recognize them as citizens, despite their centuries-long presence in the country. The junta also has placed severe economic, travel and other restrictions on the community and forcibly converted some to Buddhism. (See “Burma’s Muslims Are Long-standing Victims of Military Regime.”)

Agence France Presse (AFP) reported February 3 that Indonesian fishermen had found a group of nearly 200 Rohingya men adrift off the northern tip of Sumatra weeks after the men attempted to flee to Thailand in makeshift boats. The survivors told AFP they had been detained and beaten by Thai military personnel before being sent back to sea on boats without motors or adequate food and water supplies.
An additional 650 Rohingya were found in Indonesian and Indian territorial waters in January, AFP said, and nearly 1,000 Rohingya attempted to flee by sea to Thailand in 2008.

Laura Tischler, a spokesman for the U.S. State Department, told America.gov February 3 that a small number of Rohingya who had been referred by UNHCR had been accepted by the United States for resettlement. The Obama administration also will “consider additional referrals … on a case-by-case basis,” she said.

Along with urging countries to work with UNHCR to determine who needs protection, the United States called on Burma’s neighbors to “press the government of Burma to end its persecution of Rohingya,” so that “those who have already fled can return home safely,” Tischler said.
She added that the Obama administration welcomes efforts by other concerned governments to work together on a common approach for protecting Rohingya people.
Posted by Unknown at 06:40 No comments: Links to this post

Video of Crisis in Arakan

Pl visit our video site to find out the crisis in Arakan-
http://www.simplesite.com/Rohingyavideo/105024805

The ongoing crisis in Arakan could not be stopped until the government reinstalled Law and Order on Rakhine people who are continued to attack defenseless confined Rohingya people.

Our greatest concern over the ongoing grave situation in Arakan State of Burma that causing death to thousands of Rohingya people.

We are sending our most urgent request to you to immediately intervene and protect millions of Rohingya people of Arakan from controlled genocide.

“Rohingya refugees need the same protection, assistance, education and a safe environment like others”

"Everyone has the right to seek and enjoy in other countries asylum from persecution,"UDHR Article 14(1).